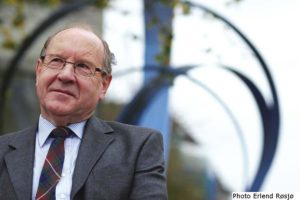 I was born in Bergen, Norway, 23 June 1935, and grew up in a small farming community some 25 kilometres north of the city.

1962: Graduated from Bergen University with a major in geophysics (M.Sc. thesis in solid Earth physics), with applied mathematics and geology as subsidiary subjects.

1962-1963: Scholarship holder for studies of palaeomagnetism at the Department of Physics, University of Newcastle-upon-Tyne.

1969: Doctorate in geophysics (thesis on “Remagnetization problems in palaeomagnetism”), University of Bergen.

1973-2005: Professor of Geophysics – Chair in geomagnetism, University of Bergen.

In previous years I was heavily involved with science administration – at my local university, and in honorary international capacities. Thus, from 1976 to 1988 I held various offices in the European Geophysical Society (EGS) – serving as the Society’s Treasurer 1982-1988.

At a 1988-1989 sabbatical leave, my longstanding questioning about the foundations of plate tectonics came to a dramatic conclusion. The first version of a new theory of the Earth – Global Wrench Tectonics, discarding all plate tectonic principles – was born. In consequence, my traditional academic life had come to an end.

Since 1989 I have lectured widely on the artificiality into which the plate tectonic model has driven the Earth sciences in recent decades – how the popular but unconfirmed notions and arguments have lost their forward-looking aspects and become a hindrance to progress.

Since 1989 my new theory of the Earth – Global Wrench Tectonics – has been presented in guest lectures and seminars at more than 50 universities and research institutions around the world.

Scientists turning away from the stream are traditionally disapproved of; group machinations are released in order to bring them back in line. At the time of my retirement in 2005 I published my autobiographical notes (in Norwegian) describing these darker sides of science.